Creating Community, Planning Public Service and Preparing for a Summer in South Africa 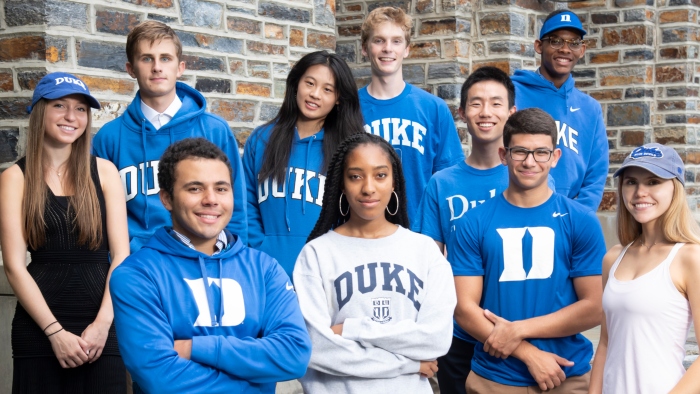 In the nearly eight months since they arrived as recent high school graduates, Duke’s first group of A. James Clark Scholars have formed a tight team, made plans to share their enthusiasm for engineering with public school students, and prepared to spend the summer interning with start-ups in South Africa.

It has been a busy freshman year.

“Applying to be an A. James Clark Scholar was the best decision I made before coming to Duke,” said Juliet Yznaga, a native of Austin, Texas. “We’ve made such a strong community as Clark Scholars, and I’ve gotten to meet some of the coolest professors and other people on the Duke campus.”

The A. James Clark Scholars Program, named for the prominent builder who never forgot his success began with an engineering scholarship, is a national effort focused on developing promising students as engineering leaders through business, service and leadership opportunities.

“Applying to be an A. James Clark Scholar was the best decision I made before coming to Duke.”

The program at Duke, launched in 2018 with a $15 million investment from the A. James & Alice B. Clark Foundation, also provides one-on-one mentorship and coaching in entrepreneurship and management.  Students are selected based on financial need, academic accomplishment, engagement in engineering, and leadership skills.

The group of 10 scholars, who represent six states, arrived last summer before the beginning of the 2018 fall semester for a special pre-orientation session.

“During pre-orientation, I really got to know the other scholars, and I really got to know myself,” said Sophie Rubin, a Clark Scholar from Roslyn, New York. “The leadership exercises, and the personality assessment we took, really helped me get ready for my freshman year.”

Since the start of the spring semester, the scholars have met as a group regularly with their faculty mentor, William F. Walker, a Duke PhD biomedical engineering graduate and ultrasound inventor who is also the Mattson Family Director of Entrepreneurship @ Duke Engineering.

“The A. James Clark Scholars Program at Duke maximizes the Duke experience,” Walker said. “In addition to service-learning, business courses, and leadership training, we see each scholar, over their four years, developing deep entrepreneurial confidence.”

As the inaugural cohort, Walker said, students were asked to look upon the A. James Clark Scholars Program at Duke itself as a startup and to work together as a team and innovate to define its culture.

The program at Duke launched in 2018 with a $15 million investment from the A. James & Alice B. Clark Foundation.

Because contributing to the community was so important to Mr. Clark, service is part of the Clark Scholar experience. For their spring service project, the Clark Scholars at Duke will create, program and present a STEM camp in at a Durham public school. The event in April will include students from Sherwood Githens Middle School, located about six miles from the Duke campus.

“The idea was that each us of is excited and enthusiastic about science, technology, engineering and mathematics, and we wanted to share that excitement, and build that excitement, among younger students,” said Clark Scholar Marcellus Jordan, originally from Houston.

The middle-school students will be challenged to build textbook-supporting towers from newsprint and will receive a quick lesson in coding.

After the end of classes in May, the Clark Scholars will commit their summers to unique experiences related to entrepreneurship. One scholar will participate in the Ronald & Carrie Ludwig Duke in Silicon Valley program, offered through the Duke Innovation & Entrepreneurship Initiative—and will get a rare look inside the world’s tech-industry giants.

Nine of the scholars will spent 10 weeks in a cultural immersion and internship experience in Cape Town, South Africa.

Through iXperience and its U.S. academic partner, the University of Virginia (also a member of the A. James Clark Scholars Program network), Duke's Clark Scholars will begin with a course on South African politics, culture, history and current events in Charlottesville.

Then, in Cape Town, each scholar will take courses on finance, consulting or product management, and intern at a local startup company.

Asked what their favorite parts of the program have been so far, the Clark Scholars at Duke each pointed to one thing—the strong relationships they’ve built with each other.

“There are studies that say that humans can have only 20 or 30 genuine connections,” said Philip Liu, a Clark Scholar at Duke from Austin, Texas. “Ten or 15 of mine are all from the Clark Scholars Program, which says a lot about it.”